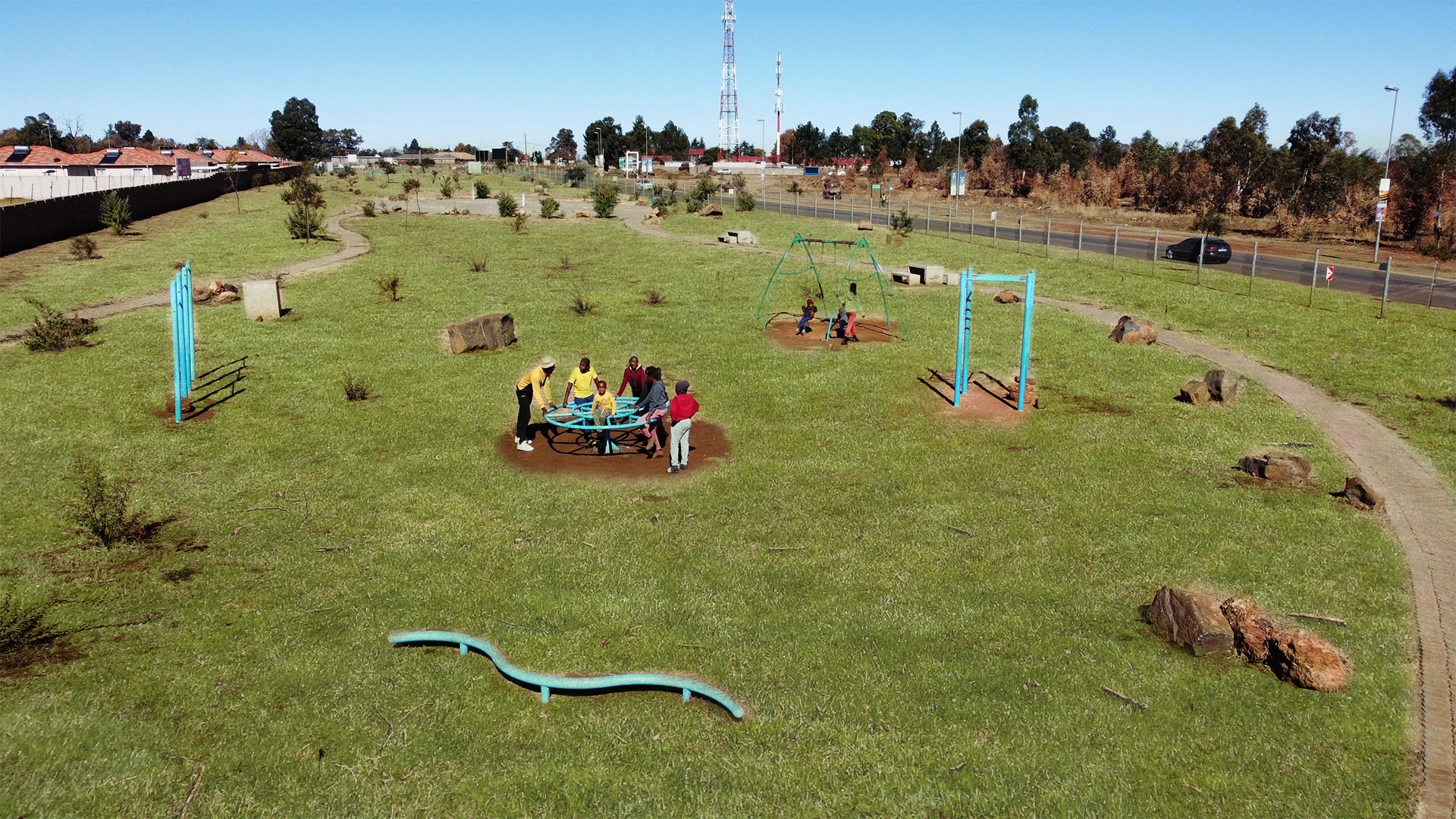 In the planning of every town, there are several boxes to tick. Homes? Check. Water and electricity? Check. Roads and drainage? Check. However, beyond the functional there’s another need, one that is arguably just as important. Neighbours, families and friends need venues to socialise, worship and learn, making community facilities essential.

In the planning of every town, there are several boxes to tick. Homes? Check. Water and electricity? Check. Roads and drainage? Check. However, beyond the functional, there’s another need, one that is arguably just as important – that of community facilities.

“We aim to build communities, not just houses. We want to make people’s lives more convenient, to elevate them. Sky City is the embodiment of that vision,” says Alda Erasmus, head of communication, Cosmopolitan Projects, the developers of Sky City.

The town planning process requires a ratio of social stands to residential stands, and within the greater Sky City, there are 21 stands earmarked for community or social facilities, such as schools, crèches, churches, clinics or community centres. “Developing these stands and the community facilities is a gradual process which is happening as the community itself is growing,” says Alda.

When deciding which facilities are in need, the Sky City team is led by the community. “We make sure that all basic amenities are covered, but also take a natural approach to developing the stands,” says Alda. “If the community starts playing soccer, we’ll build a soccer field; if they start using an area as a taxi rank, we’ll build a transport facility. It’s an ongoing process, with constant feedback.” 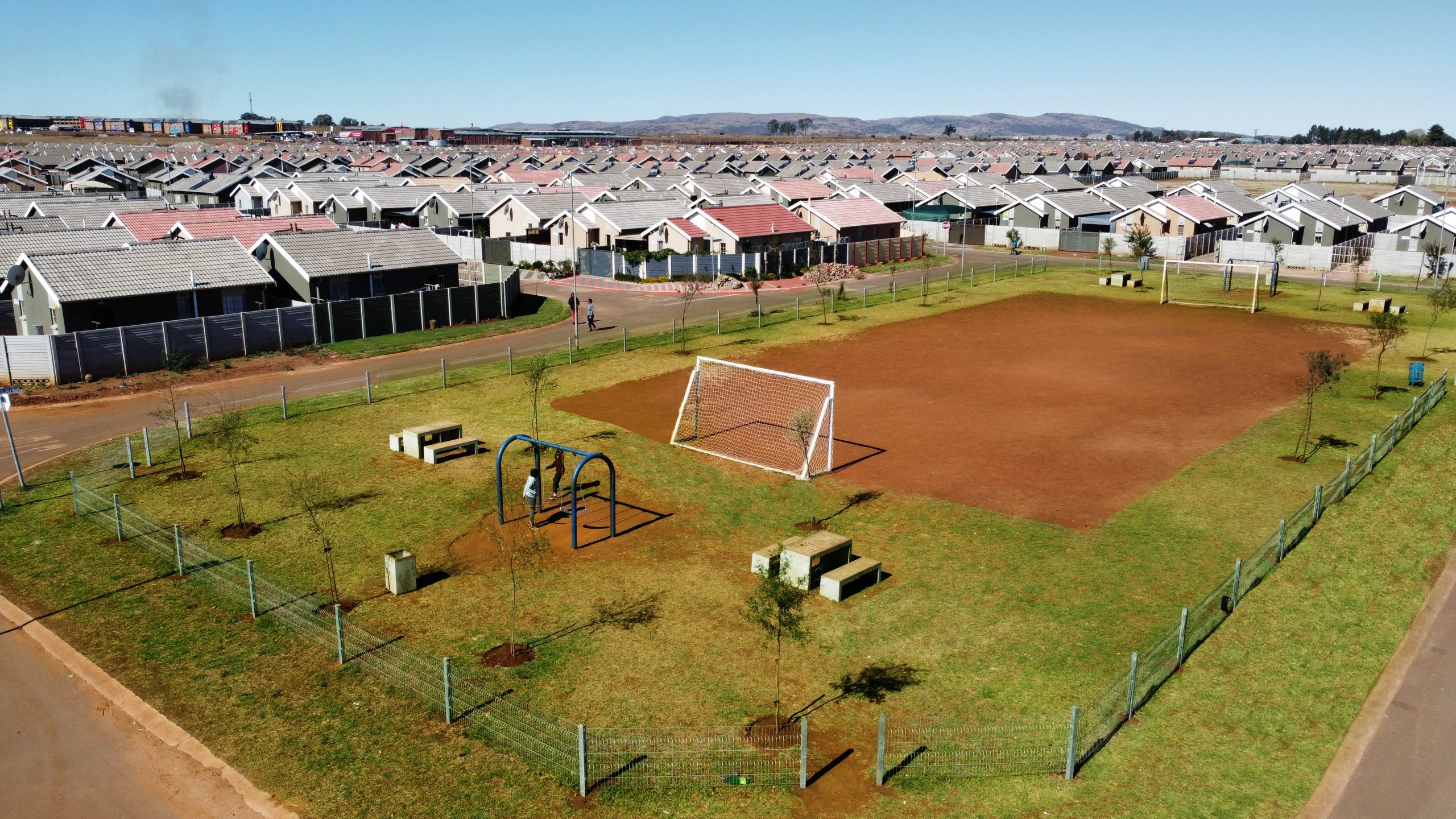 Already there are about 15,000 people living in Sky City and, says Alda, it’s been interesting to see how community life has been taking shape. “We’ve seen how the residents have already come together and started organising themselves, becoming more independent and innovative,” she says. “There are small businesses like shops, crèches and car washes springing up, and residents have even implemented extra security with cameras and patrol vehicles.”

With plans for 17,500 houses and apartments over its 10 years of development, there will naturally be a huge need for social spaces. “Because we’re focusing on creating an integrated development at Sky City that provides a variety of amenities, facilities and conveniences to its residents rather than just housing, we’re taken a different approach,” says Alda. “Rather than waiting for institutions to develop these facilities – which from our previous experience seldom happens – we are now partnering with third parties that specialise in certain fields to bring these amenities to the Sky City community sooner rather than later.” 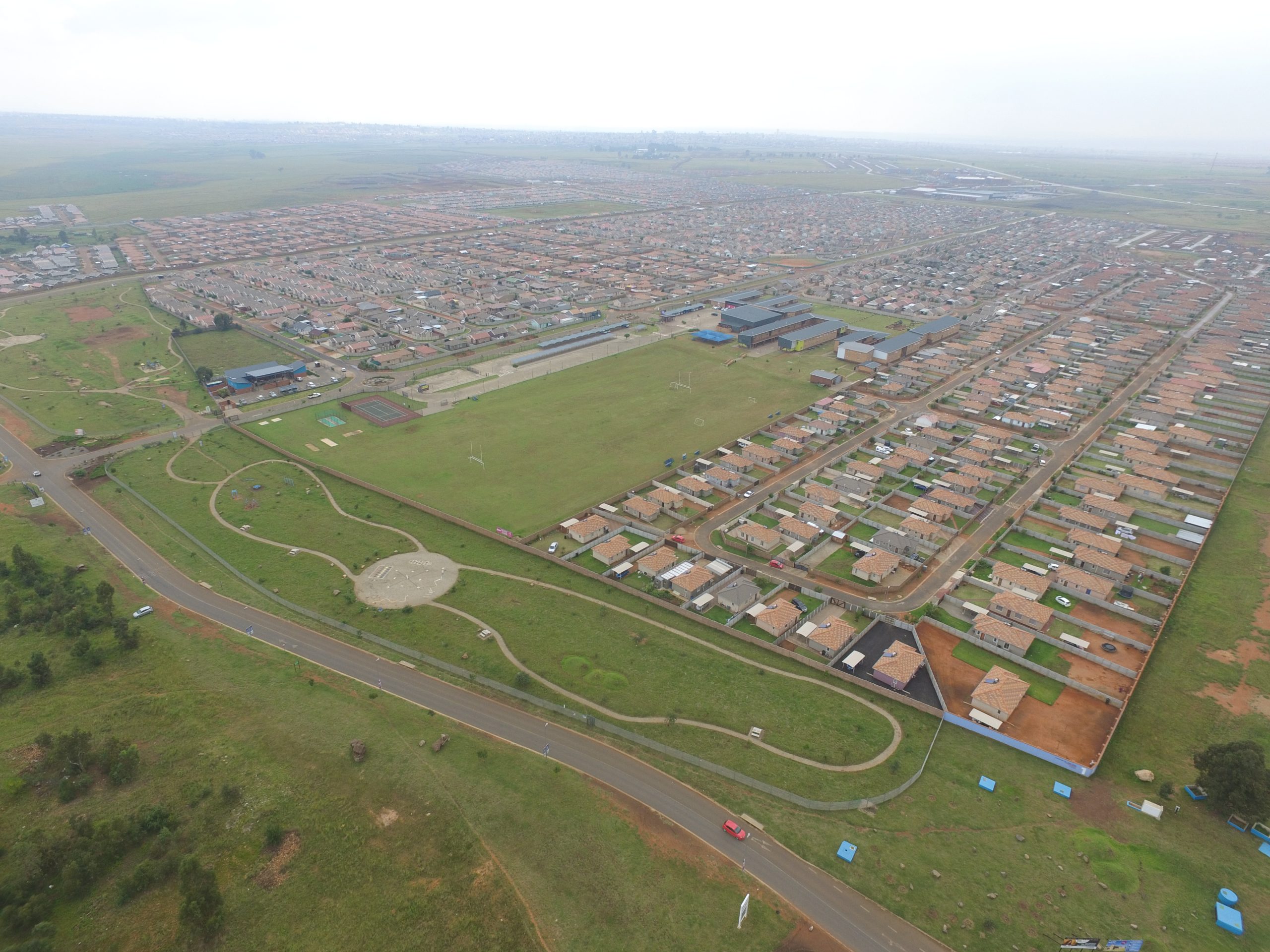 This approach changes the whole dynamic within the community. “Our residents’ quality of life is improved exponentially because they have amenities on their doorstep,” says Alda. The first to be introduced was the affordable independent school, Royal Schools Sky City. Operated by Royal Schools and funded by Old Mutual and the PIC, the school caters to Grade RRR through to Grade 12. GMI Property Group manages Sky City Mall, a regional shopping mall of which the first phase is already in operation.

A R10m Engen garage opposite the mall is under construction, and GMI is also in the advanced planning stages of a big-box retail centre, clinic and college. Sky City’s first church and pre school is run by Judea Harvest and the AFM Church of South Africa. The space will double as a skills development centre in the evenings and over weekends. There are play parks dotted throughout the established extensions of Sky City, equipped with jungle gyms, a BMX track, jogging trails and mini soccer fields – and there are plans to develop a multi-sports facility soon. 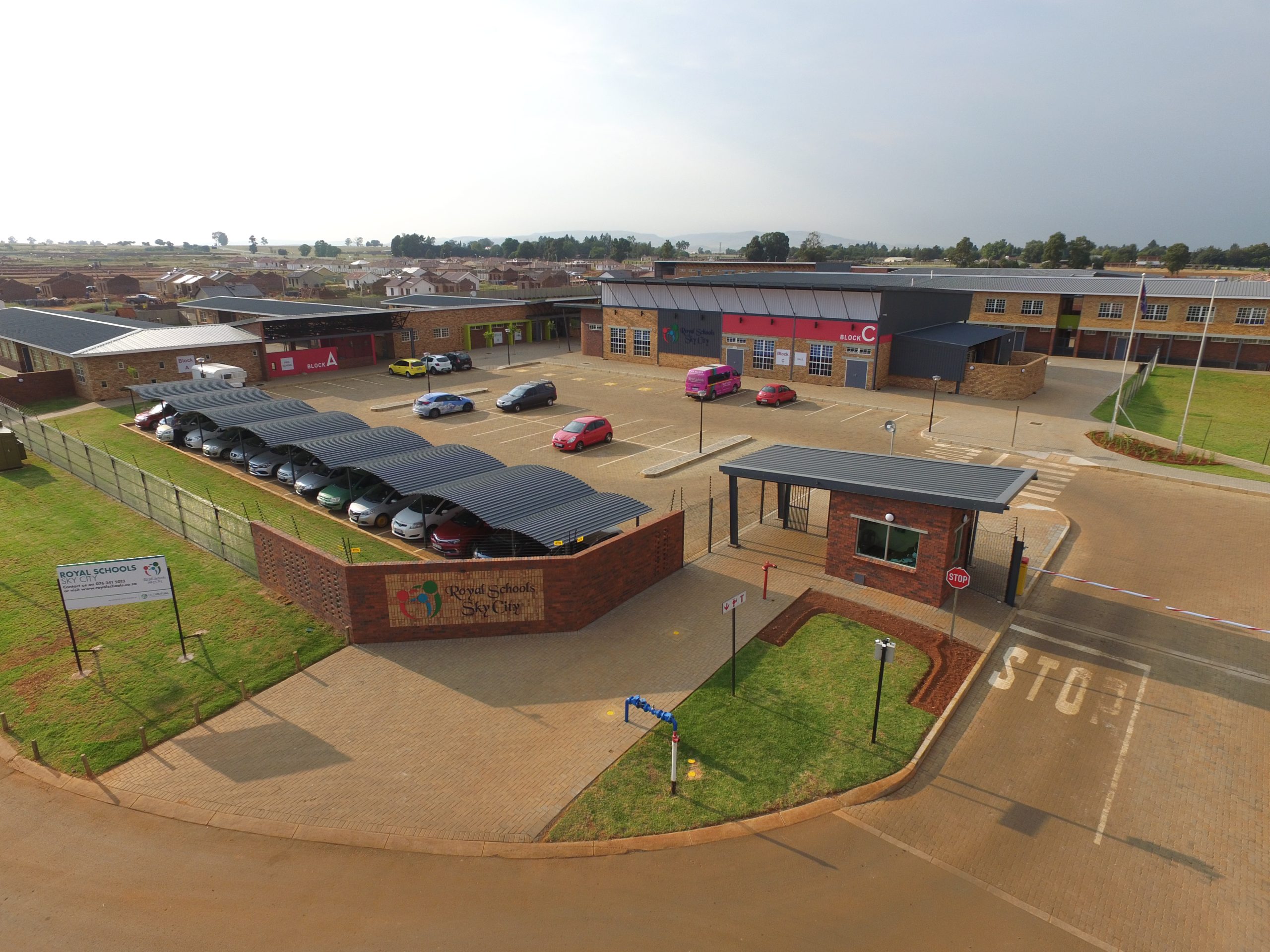 Another way in which Sky City is improving its residents’ lives is through its innovative smart-city concept. It enables advanced technological applications such as sophisticated security measures and e-payment systems. It provides Wi-Fi connection throughout the development and includes cameras in public areas like parks, shopping malls and entrances. This high-speed fibre connection plays a key role in creating a connected community. With no installation fees or contracts, residents have access to online resources for kids’ projects, watching sports and movies, or making online phone calls with a pay-as-you-go option.

“By providing these recreational, educational, commercial, health and religious amenities to the residents of Sky City, we’re seeing our vision of creating a world-class integrated affordable housing development, where its residents can live a comfortable, convenient and dignified life, become a reality,” says Alda. “Even though this is fairly common in luxury housing developments in South Africa, it’s a rarity in the affordable housing space. As far as we know, it’s also a first for South Africa.” 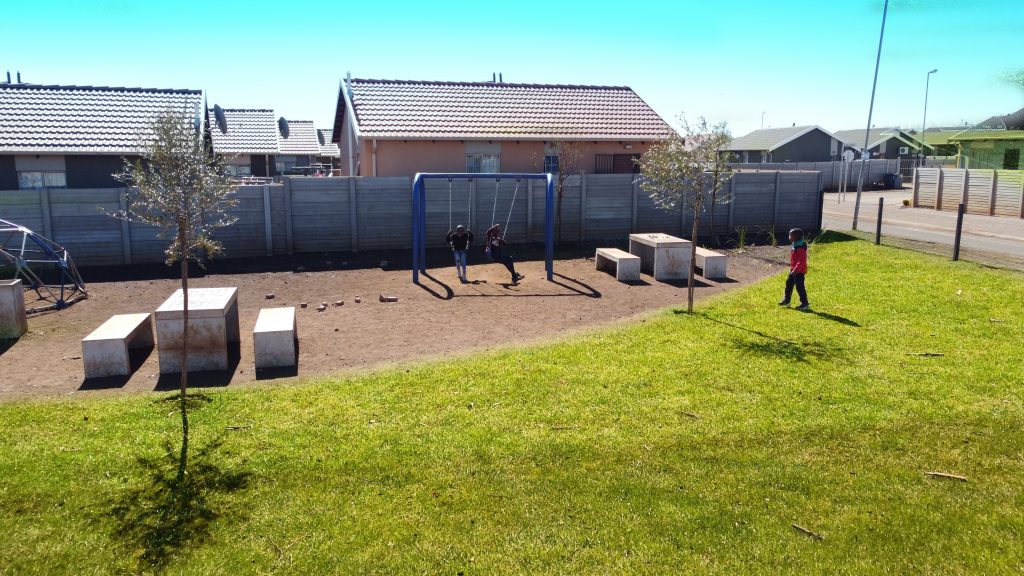