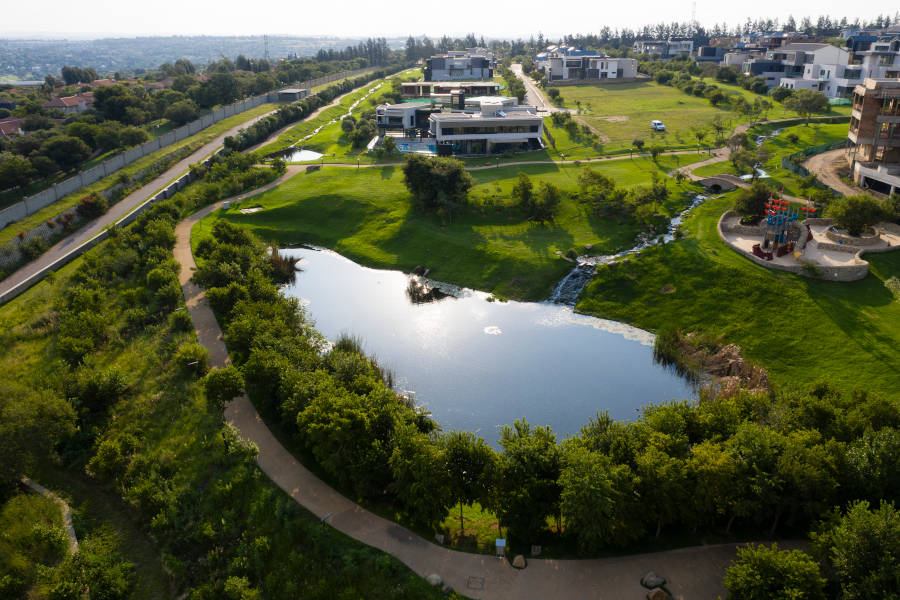 The name ‘Steyn City’ is synonymous with luxury and convenience amid a highly secure environment – but also with pioneering a new way in property.

That’s because Steyn City has set new standards in urban living. From the time the developers first broke ground in 2015, the aim was to create a lifestyle that ensures ease at every touchpoint, making it possible to live, work and play without leaving the front gate.

Steyn City offers absolutely everything you could need from a leisure perspective, as well as the necessaries such as a forward-thinking education at the Steyn City School campus from Grade 000 to 12 and AAA-grade offices at Capital Park, all on-site. This eradicates morning and afternoon commutes, making for a more stress-free life with extra time to spend doing the things you love – like making memories with your friends and family, or exploring new hobbies. 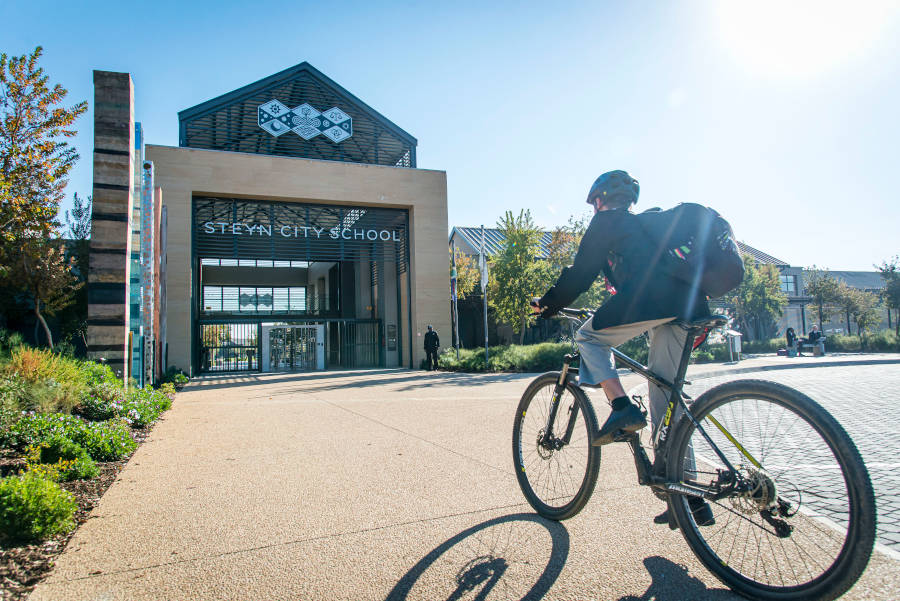 All of this is offered against the backdrop of the signature 2 000 acre indigenous planted parkland, which means that every resident has access to South Africa’s most beautiful back garden – whether they live in a free-standing house or a convenient cluster or luxury apartment.

What really sets this development apart, however, is the fact that all of the infrastructure has been in place since the time of launch. This means that investors and potential purchasers have been able to able to see exactly what they are buying into, and are assured that there are no nasty surprises further down the line.

It’s small wonder, then, that Steyn City is a consistent winner of global awards and accolades; the most recent being its inclusion in New World Wealth’s top 10 picks of leading estates around the world – a sure sign that it is well on the way to achieving its goal of being the very best development worldwide.

What sets Steyn City apart? In a sentence:  the commitment to offering a lifestyle like no other.

This starts with the idyllic backdrop: the sprawling, 2 000-acre secure indigenous parkland which is home to many bird and animal species – making a walk here rather memorable with complete peace of mind – not to mention the many land art pieces which provide a climbing space for children while adding a unique beauty to the surrounds.

Then there’s the sheer variety and quality of the amenities. Steyn City has something for every interest, from golf to fishing, gym, yoga, horse-riding, swimming, cycling, mountain biking, running, – and many other hobbies.

The development also has a firm emphasis on convenience.  Making sure that everything the residents could possibly need at any point in their day is available on site. This means you can have a takeaway delivered to your front door from The Deli while the children catch a shuttle from the Steyn City School Campus to home.

It all adds up to more breathing space, more room to explore – and, more importantly, time for other pressing things in life – physical health and wellbeing, family time, and making new memories.

Get in touch with the Steyn City team

When Steyn City was first launched, on Johannesburg’s urban edge, a number of potential purchasers and investors raised their eyebrows: did it make sense to buy into a development located further from the centre of the economic activity, they wondered?

Six years on, it has become clear that the answer is an unequivocal ‘yes’. For one thing, that ‘fringe’ location is no longer quite so fringe. As Johannesburg continues to grow and sprawl, Steyn City’s location in the ‘New North’ – between Johannesburg, and Pretoria, and close to Midrand and Waterfall – becomes an obvious asset, with nearby access routes making it possible to move between meeting points in either of these key Gauteng nodes. With President Cyril Ramaphosa earmarking this region as the site for South Africa’s next large urban development (Lanseria Smart City), Steyn City is set to be an even more integral part of the province’s burgeoning activity.

Steyn City Properties has played its part in increasing the attractiveness of this area for residents, neighbourhoods, communities, and businesses alike, through its involvement in a public-private partnership which saw a significant investment in the surrounding infrastructure. As a result, the road network has benefited from major upgrades, as has water and other networks in the region.

At the same time, a number of key amenities in the area have also undergone upgrades. Fourways Mall, for example, has been through a refurbishment which has seen it become one of the leading retail destinations in the country, while Lanseria International Airport has made transport to the area far easier and more convenient with the expansion of their terminal, retail precinct, and parkade.

It’s not surprising, then, that Johannesburg’s ‘new north’ is developing a reputation as a prime location for businesses and home-owners looking to enjoy the benefits of living away from Johannesburg’s incessant bustle, while still being close enough to take part in the pace and opportunities of Africa’s financial hub.

A HOME FOR EVERYONE

Whatever your stage of life – whether you’re a busy executive seeking a sophisticated pied a terre or a newlywed, whether you’re looking for a spacious home for your growing family or a low-maintenance lock up and go during your retirement years – Steyn City has the perfect home type for everyone.

Its range of properties varies from stands with the option to design your dream home, to convenient clusters and luxury apartments.

What makes each of these offerings stand out is that every single home enjoys access to the unique 2 000-acre indigenous-planted parklands, giving each resident a back garden without comparison. Of course, the use of all the five-star facilities is a given, too. 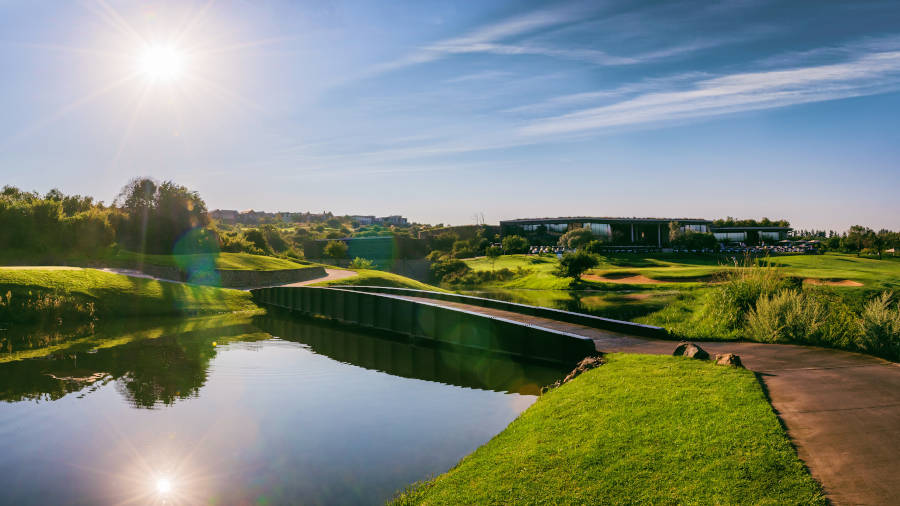 Everything at Steyn City is led by a single, overarching goal: to be recognised as the very best residential development in the world.

With this in mind, the ambitious developers have set about to create a lifestyle entirely like no other, where luxury meets convenience.

The 2 000-acre indigenous-planted parkland plays a huge role in helping them achieve this goal, ensuring residents can enjoy a lifestyle where space and a connection with nature are at the very core.

Every aspect of the Steyn City lifestyle has been planned around the love of the outdoors and wellbeing that this connection with nature allows. The development is well-known for its 18-hole Nicklaus design championship golf course, complete with an award-winning clubhouse, the 5-star dining experience at Nineteen, as well as its indoor aquatic centre, equestrian centre (also with a clubhouse offering a farm-style menu), fully equipped gym, outdoor exercise stations, 45 km well-lit promenade ideal for walking and jogging, and 50km MTB track.

TAKE A TOUR OF THE STEYN CITY PARKLAND RESIDENCE:

Add in facilities that make for great family time, The Deli pizzeria with light meals – as well as resort pools, a Dino Park, Skate Park,  it’s a wonderland for all ages.

In closing, Steyn City has developed an address that speaks now more than ever, to the needs of South Africans who wish to live their lives to the full in a peaceful and secure environment. This makes Steyn City more than an address: it is a lifestyle offering the one thing we all crave: security in uncertain times. 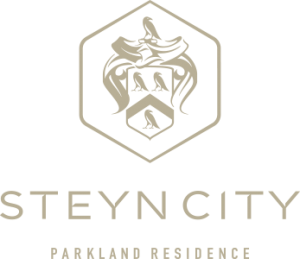