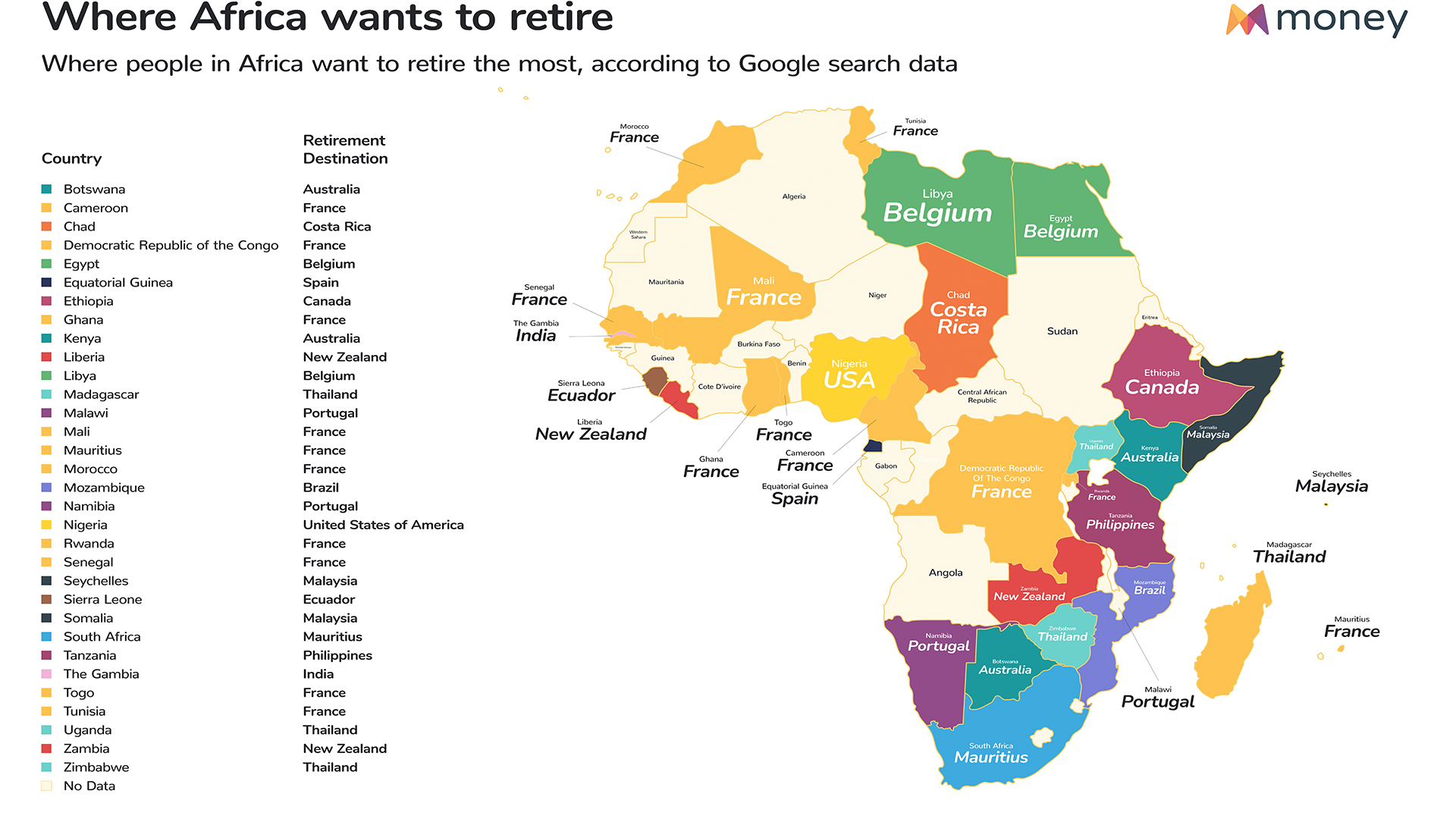 WHERE THE WORLD WANTS TO RETIRE TO THE MOST, REVEALED BY GOOGLE DATA 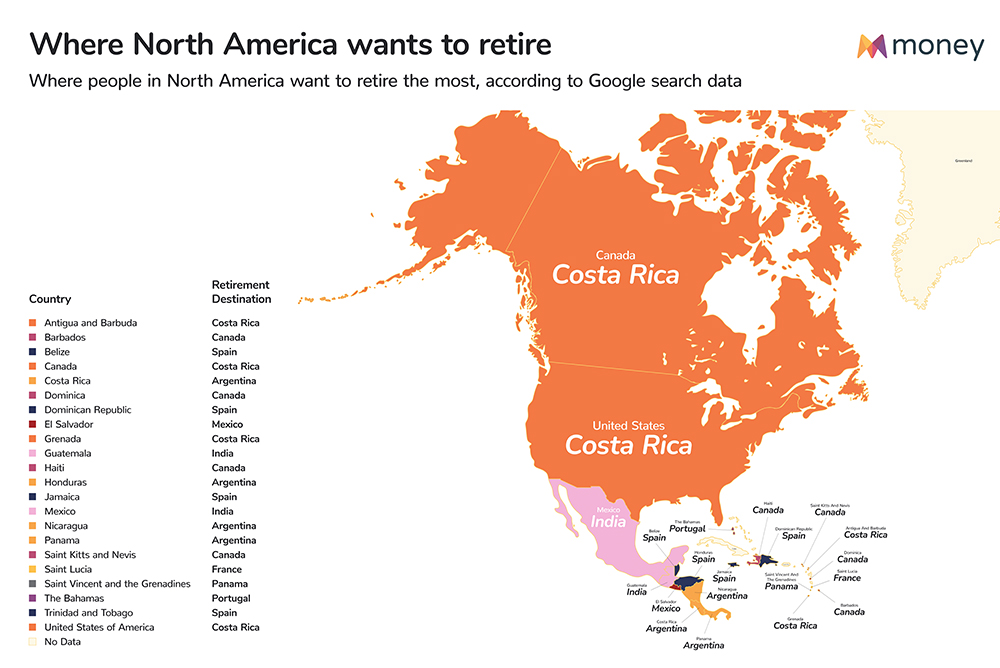 A new study* by money.co.uk has revealed where the world is planning on retiring to the most, crowning France as the most sought-after retirement hotspot, whilst Americans are hoping to retire to the sunny hotspot of Costa Rica.

With restrictions starting to lift around the world, the study analyzed where the inhabitants of 142** different countries are searching to retire to the most on Google.

Home to a reasonably priced property market, strong healthcare system and warm climate, France proves to be a favourable choice for many retirees looking for a change of scenery in their later years. Taking the top spot with a total of 20 countries that include the likes of Italy, Belgium and Cameroon searching to retire here more than any other country.

However, the other side of the Atlantic also proved popular, with Canada ranking in second, being the most searched retirement relocation destination for 14 countries that include Albania, Taiwan and more. Argentina ranked third, favoured by 11 countries in total, with many already based within South America.

THE 10 MOST SEARCHED FOR RETIREMENT HOTSPOTS 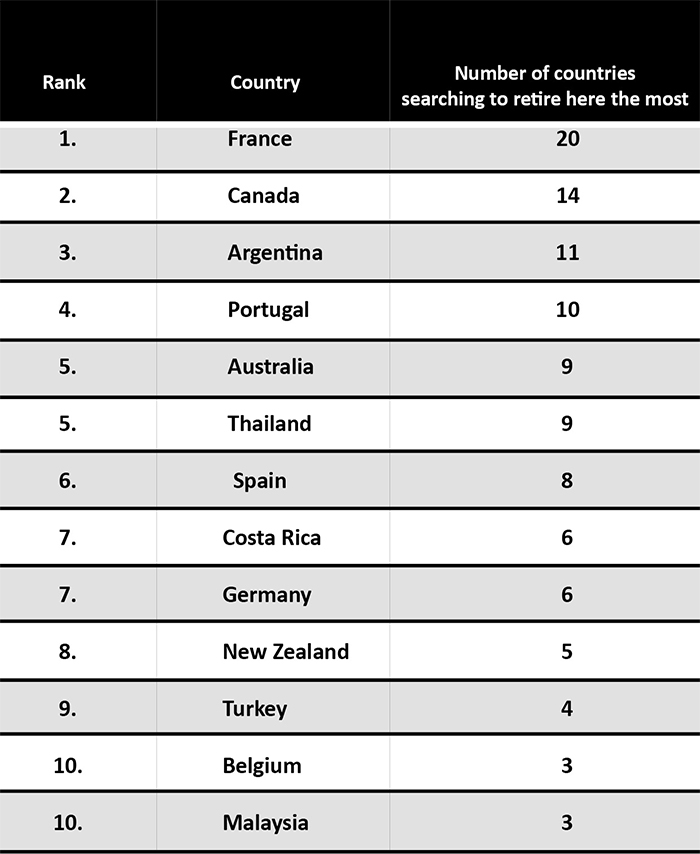 Potentially due to the difficulty of being able to actually retire to the United Kingdom or the United States of America, both of these countries were discovered to be less desirable when it comes to finding the right place to retire. Only America topped the searches for retirees in Nigeria, and the UK failed to rank top for any pensioners worldwide.

Meanwhile, inhabitants of South Africa search most for retirement options in Mauritius, a country that offers beautiful surroundings and the benefits of a favourable tax system that is only a short flight from home.

WHERE PEOPLE IN SOUTH AFRICA WANT TO RETIRE TO THE MOST

Salman Haqqi, personal finance expert at money.co.uk, commented: “Retirement is an exciting phase of our lives and for many, this means the opportunity to spend some of our pensions, and the latter years of our lives, in a new country altogether.

“We hope our findings help to provide some inspiration for anyone currently considering retiring abroad, wherever they may currently be based”.

For further information on the findings, the top-ranking countries and their options for retirees, visit: https://www.money.co.uk/pensions/where-the-world-wants-to-retire

*The study used Google search data (across all languages) to establish the average monthly search volume in each country, for common search terms associated with retiring to another country, such as ‘retirement in (country)’, ‘retire in (country)’ and ‘retire to (country)’. **142 countries were detailed in total, due to certain countries not providing enough search data to be featured. In some instances, search volumes for top-ranking countries were the same. Here, an alphabetical order was used to define a singular top country, however further rankings can be found on the money.co.uk website. Data correct as of October 2021.

Money.co.uk is one the UK’s leading comparison websites for financial services. With the shared goal to help people make sense of their money, we support consumers with finding mortgages, loans, credit cards, bank accounts and insurance from more than 600 providers.

Our free, online comparison service allows UK consumers to compare thousands of financial products. From credit cards to savings accounts, loans to travel money, we want our users to feel reassured that we’re on their side when it comes to their finances.

Money.co.uk is fully authorised and regulated by the Financial Conduct Authority (FCA) and is owned by RVU, which also owns Uswitch.com and Confused.com