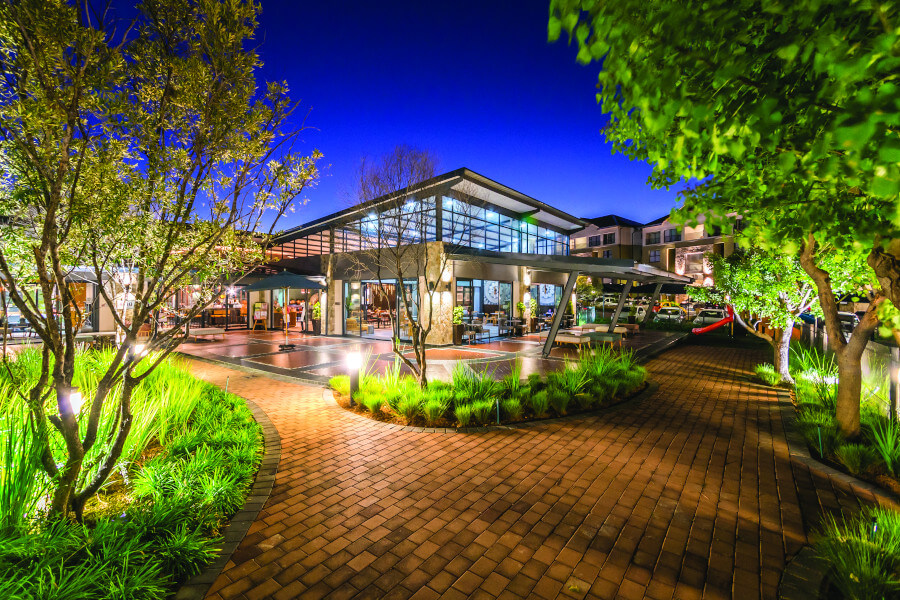 Water shortages and rising energy bills are driving the countrywide demand for sustainable property; we look at how green and award-winning initiatives in this sector are setting up South Africa for a brighter future

South Africa’s property sector is becoming greener every year. According to the 2018 World Green Building Trends report, the percentage of developers who’re members of the Green Building Council of South Africa (GBCSA) rose from 31% in 2015 to 51% in 2018. This will likely translate into more green developments, including residential projects.

Sustainability is about more than keeping your utility bills low and safeguarding your water and electricity supply. South Africa’s property industry is driven by increasing awareness around environmental issues. “Homeowners, tenants and investors want to know what is being done to reduce the impact on the environment,” says Amdec Property Development MD Nicholas Stopforth.

Jessica Hofmeyr, sales, rentals, marketing and operations executive at Century Property Developments, shares Cruickshanks’ opinion. “People are more educated on the subject, and sustainability is becoming a deciding factor on where they live,” she says.

What makes a home, apartment or residential development sustainable starts with the way it is built, says Cruickshanks. “Many developers are using the best-practice approach to designing a building’s envelope – walls, floor, and roof – appropriately for the region, taking into account specific elements such as insulation, correctly sized and orientated windows and doors, shading, as well as building materials with the right thermal mass. This is the ability to store and release heat at different times of the day,” he says. “Technology is added to enhance a building’s performance.”

Green architect David Talbot, founder of the multidisciplinary consultancy Platform, explains that it comes down to resilient design, which is defined as the intentional planning of buildings, landscapes, communities and regions in response to vulnerabilities to disaster and disruption of normal life. “Resilient design has become a genuine trend among developers and architects, one that helps occupants deal with Eskom and water outages,” says Talbot. “Individual homeowners are looking at this more and more, too.” 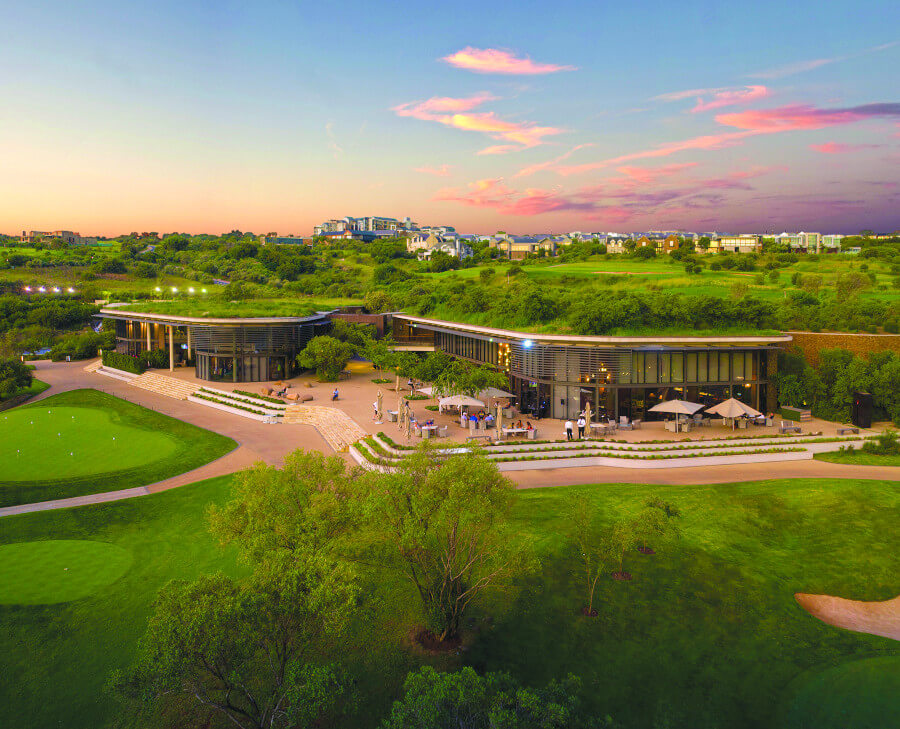 In arid South Africa, water is a big issue, particularly from a property development point of view. As the effects of water constraints are becoming more palpable, more developers are going the extra mile to save every drop. Simply installing rainwater tanks is no longer enough.

“We have implemented systems that detect water leaks immediately, and our latest developments including The Precinct in the Waterfall area, The Parks in Riversands and The Campus in Auckland Park, have greywater systems in place,” says Hofmeyr.

Amdec Property Development, too, has upped its water-efficiency offering. It has fitted its most recent development, The Yacht Club in Cape Town, with a reverse osmosis plant that provides 35 000 litres of clean drinking water every day, taking it off the municipal water grid completely. Amdec’s future Harbour Arch development will be equally water-wise. “With water scarcity being the new normal, developers must implement water-wise strategies from the ground up,” says Stopforth. 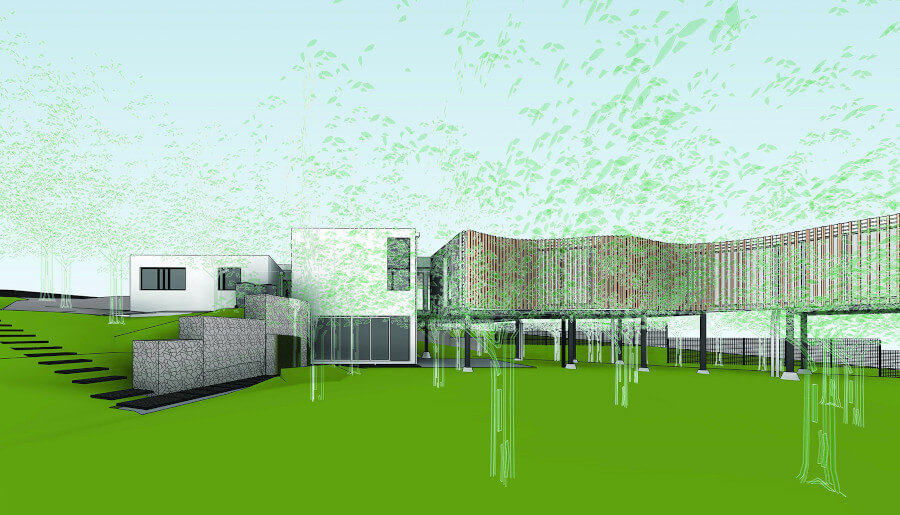 With its popular buy-to-sell and rental developments across South Africa, Balwin Properties announced recently that it broke a world record with the largest Green Edge registration of more than 15 500 units. Developments such as Kikuyu, The Whisken, Ballito Hills and The Huntsman form part of the 16 094 Edge-registered homes expected to be completed in six months. Balwin Properties CEO Steve Brookes says this achievement underscores their commitment to sustainable development and adds to the appeal of investing not only in convenience of location but also in innovation.

Africa’s first residential development to receive the GBCSA’s Edge final certification, this property is up to 29% more energy-efficient and 25% more waterefficient than the average regular home.

This office development by Legaro Property Development was the highestrated green building in the country in 2018, and got six stars from Green Star SA. The design incorporates minimalist geometries, with louvres serving as a passive shading device.

Before investing in an estate, first establish its sustainability profile in a high-risk environment, says Louise Martin of Estate Living. Though it has become common for new estates to follow green practices, established ones such as Arabella and Helderberg Village Estate in the Western Cape are now retrofitting their buildings by installing water-treatment devices, for instance. What’s more, their homeowners association rules are reviewed regularly to keep up to date with new sustainable developments. 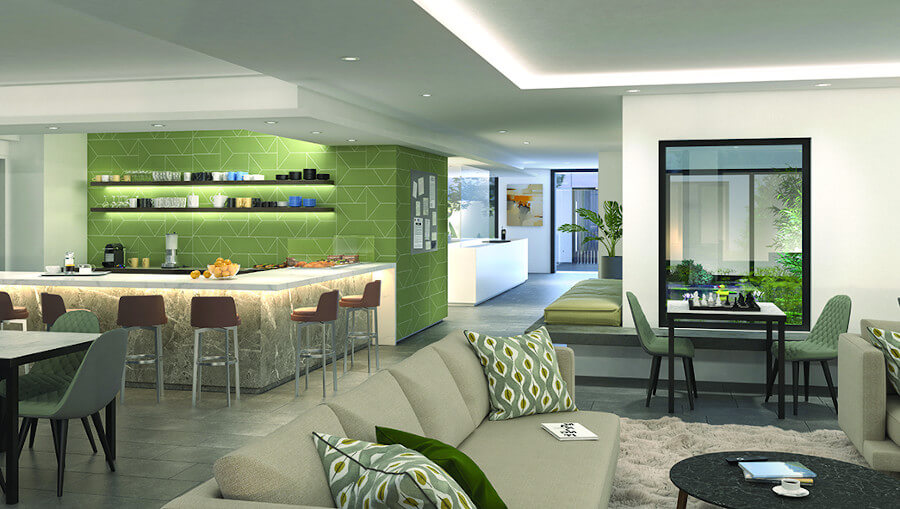 Looking at lowering a development’s water footprint, the role of landscaping cannot be ignored. This goes beyond planting water-wise vegetation. Val de Vie in Paarl, for instance, has implemented innovative irrigation technology interventions that have decreased its Pearl Valley Golf Course’s irrigation footprint by a third over the past summer season.

The choice of paving can also help residential developments be more sustainable. At Century City in Cape Town, Rabie Property Group is doing its bit by, where possible, having storm water running into the ground instead of draining off hard surfaces and roads. “This assists with the natural regeneration of the water table within developments,” says Rabie director John Chapman.

“By designing your development’s landscape in a certain way, you can also capture storm water in retention ponds,” adds Talbot. “Municipalities are encouraging civil engineers and developers to incorporate such ponds in their developments’ landscaping to retain and store excess rainwater, which can be used for irrigation or even to flush toilets.”

Another trend among developers is to reduce their projects’ waste output. Talbot says the construction phase of property developments tends to generate a lot of waste that often goes to landfill. Fortunately this is starting to change, thanks to new legislation.

“The City of Cape Town has implemented rules prescribing that waste-management plans have to be submitted along with building plans. This is pushing contractors to recycle more waste rather than send it to landfill,” he says.

Innovative building techniques that produce less waste than bricks-and-mortar construction are also gaining traction. Cross-laminated timber (CLT) construction, for example, involves the use of large prefabricated sustainably produced wooden panels to build walls, roofs and floors. According to Talbot, the environmental impact of CLT is lower than that of many conventional building methods. “Bricks, for instance, need to be fired, which uses a lot of energy. In Europe, CLT is even used to build multi-storey buildings.” 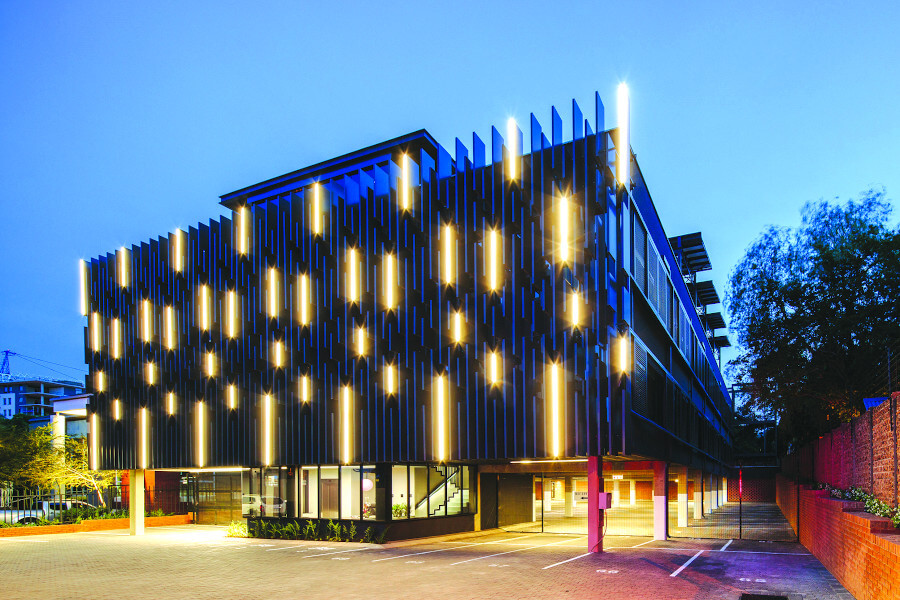 BALWIN PROPERTIES are top award-winners for their environmentally conscious building practices, from the use of eco-friendly appliances to sustainable solar-supplemented electricity. Its Kikuyu and The Whisken developments are some of the first in South Africa to bring more economical and cleaner energy to residents through the introduction of solar energy. CEO Steve Brookes says it is a concept they are looking to roll out in future developments.

STEYN CITY in Midrand has used energy-saving resources in all its buildings from the outset, and thousands of indigenous trees were planted across the sprawling estate. Steyn City’s 3000m2 clubhouse with its grass roofs and thriving plant life has minimal environmental impact. By involving the local Diepsloot and Cosmo City communities in the construction of the clubhouse, the estate also provided local employment. “These will be among the first Edge-certified projects to include solar PV technology, offering energysaving benefits to residents and setting an exciting trend in green homes,” says GBCSA managing executive Grahame Cruickshanks.

BLOK’s new development in Sea Point, EIGHTONN, harvests rainwater and has a borehole connection and a filtration system, with water running into tanks in the basement of the building. Says MD Jacques van Embden: “This is added to the already efficient glazing, water heating and smart energy products and appliances we always include as fundamentals of a good building and home, ensuring we are working harder to create more sustainable buildings and living habits.” 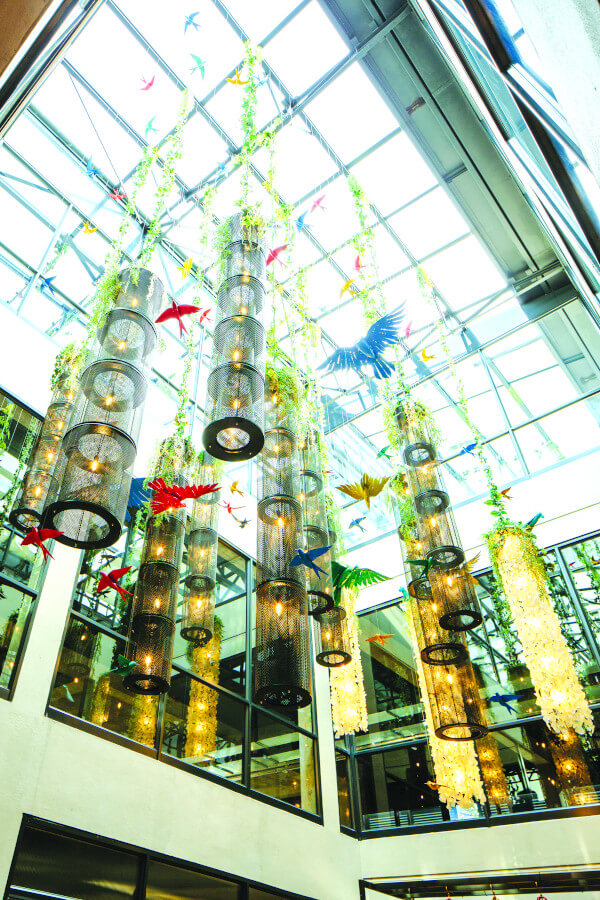 Energy efficiency has always been a key driver of the green building sector in South Africa – one that more property developers are now taking to the next level. Solar panels alone no longer suffice.

The Rabie Property Group accommodates solar panels where possible and installs heat pumps instead of geysers across its projects. “We aim for designs that introduce the maximum amount of natural light to reduce the requirement for artificial lighting,” says Chapman. “This, along with energy-efficient glazing, reduces heat gain in summer and heat loss in winter, thereby decreasing a building’s electricity usage and lowering its carbon footprint. “Harvesting energy from the sun and using long-life LEDs reduce the running costs over the long-term life cycle of a development.”

As the number of green developments grows, more homeowners are retrofitting their existing homes. This also applies to developers like Century Property Developments, which constantly re-evaluates its plans from a sustainability point of view. “We have built a solar plant at our Carlswald and Crowthorne luxury apartment complexes in Midrand,” says Hofmeyr. “Both complexes feature new water-management technology that allows us to monitor the quantity of water used. We have installed rainwater-catchment systems, too.”

Talbot confirms the popularity of retrofitting, adding that it is not limited to residential projects. “Big funds like Growthpoint are retrofitting their existing spaces with green building technologies and having them rated.”

“The addition of solar power will save residents on their monthly electricity bill Steve Brookes, CEO of Balwin Properties” 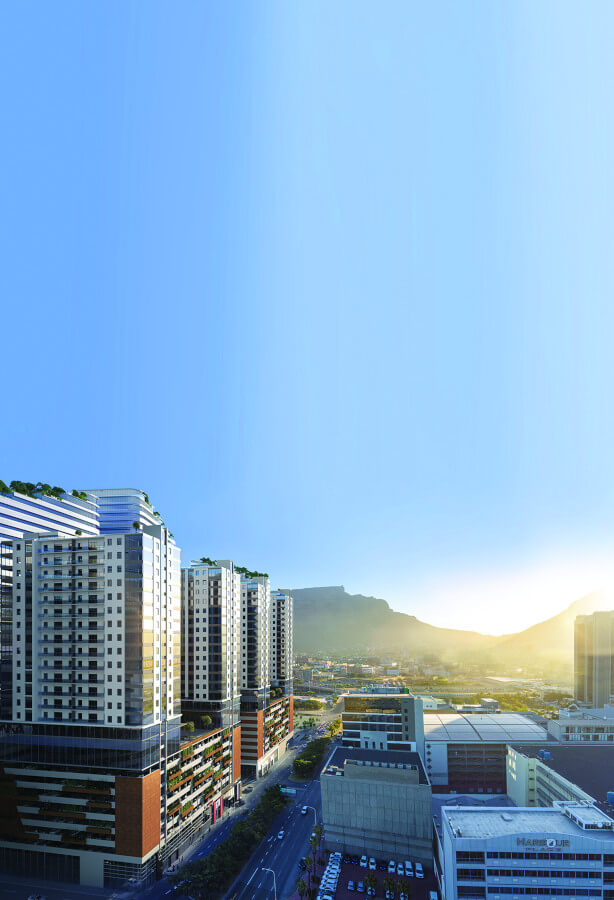