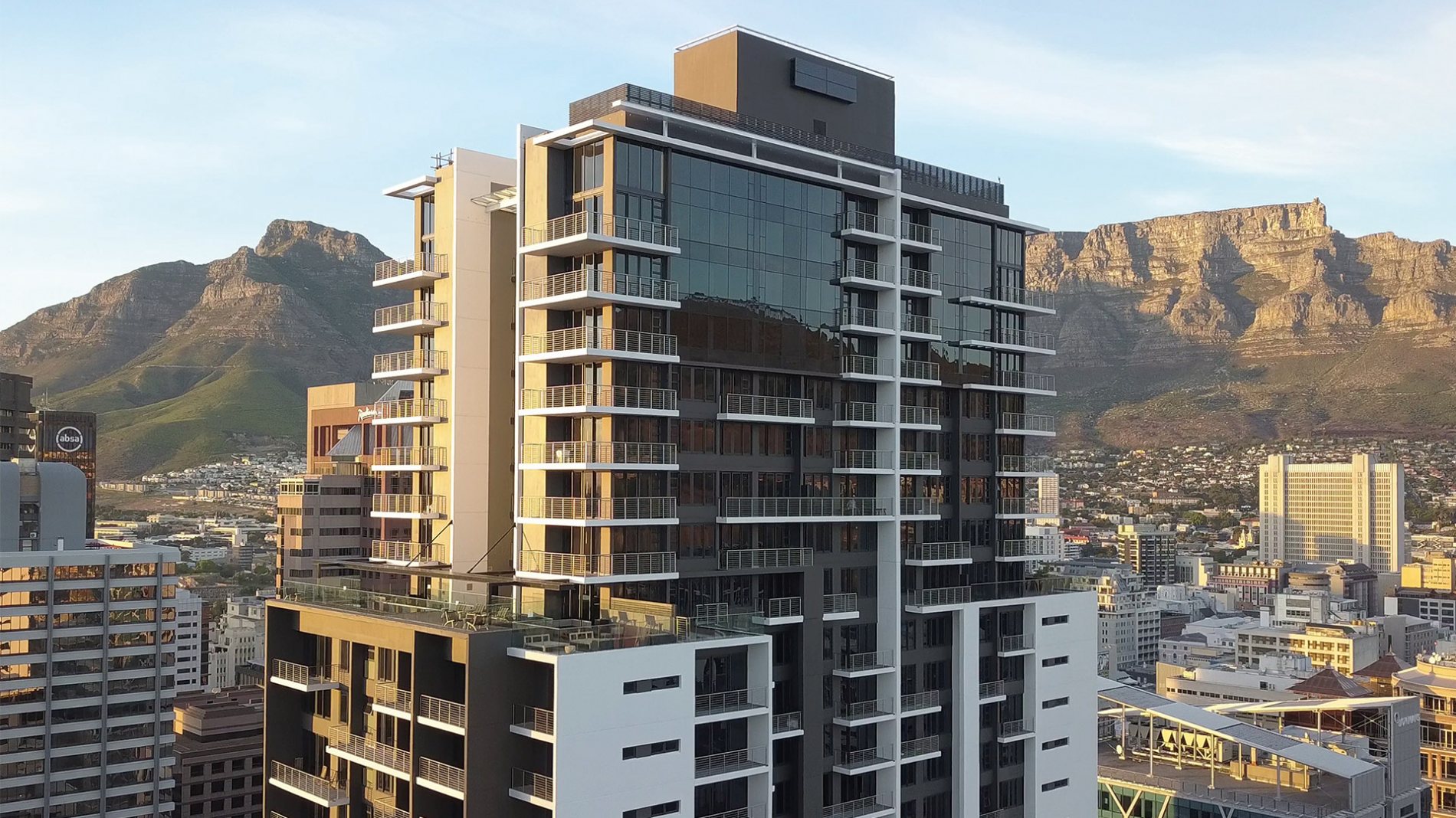 As a developer well-known for iconic and technically demanding projects, FWJK Developments knew that Zutari would be able to pull off the tallest residential and second-tallest mixed-use development in Cape Town in the past 20 years. As if this was not enough of a challenge, a key requirement for the City of Cape Town’s development approval was to retain the 12m-high existing heritage façade. Zutari had collaborated with FWJK Developments before as structural engineer on the nine-level The Docklands mixed-use building, less than 200m from the V&A Waterfront Marina in the scenic De Waterkant Village in Cape Town’s sought-after Prestwich Street. The site had an existing office building with one level of semibasement parking, ground floor parking and three levels above that.

The challenge here was that, over and above the tight budget and time constraints, the new development required an additional two basement levels to be constructed below the existing four-storey structure and three levels to be constructed on top of the existing structure. Used to devising out-of-the-box engineering solutions, Zutari came up with a lightbulb idea that allowed the centre of the building to be retained, while excavating and constructing new basement levels below and adding new floors on top. This was done by means of a novel “underpinning” method that included constructing new steel micro-piles through the existing foundations in a four-pile group arrangement per column, and connecting the piles to the existing columns with transfer steel pods. The structure that was retained was then strengthened with steel additions to the columns to allow new floors to be stacked on top like a deck of cards.

TAKE A LOOK INSIDE THE DOCKLANDS PROJECT

The Docklands project has been lauded as a significant paradigm shift in what is achievable in terms of structural engineering in SA. “It was technically challenging throughout. However, we managed to come up with a cost-effective solution involving the contractor throughout to ensure it was buildable. It was a mutually beneficial and enjoyable working relationship with FWJK Developments, and as a result we were appointed as the structural and civil engineers for 16 on Bree,” says Nick Bester, Building Structures Associate at Zutari. The rest, as they say, is history. At 120m and 36 storeys, FWJK Developments conceived the project as an iconic high-rise to meet the demand in the market for quality residential apartments. The main attraction of 16 on Bree is the combination of its height and location, offering residents unrivalled views of Cape Town’s natural beauty, while still being in walking distance of the V&A Waterfront and the central business district (CBD).

As with The Docklands, there were tricky challenges to overcome, the first of which was preserving the heritage façade while constructing the superstructure behind it. Not only did this call for innovative, world-class structural engineering, it also had to fit within the project budget and time frame. Why was this such an important requirement? Bester points out that the existing building was deemed to have significant historic urban heritage value. In addition, retaining the heritage façade creates an eye-level experience that blends in seamlessly with the surrounding area, as conceptualised by the developer and architects.

“The old and fragile exterior stone wall of the heritage building around a portion of the site had to be preserved. In order to maximise building area, the new superstructure had to be built right behind the wall, which also meant that heavy construction machinery had to move around behind the wall in close proximity for the duration of construction,” says Bester. To give an indication of the extent of the façade, 12m high equates to four storeys.

“The wall at that height was obviously not self-supporting, especially if we were to remove everything else around it. The only viable option was to support it from the street side, but this was a limited to a 3m wide pavement width.” Zutari’s innovate solution to support the façade while construction carried on unabated behind it was to install a steel bracing system with large counterweights on the street side that stabilised the wall. Another key consideration was that any support had to be temporary in nature so it could be dismantled quickly and easily. “The support had to come down so that the view of the heritage façade from the outside of the building was unobstructed and because the sidewalk needed to be accessible post-construction. We worked together with the contractor to develop a lightweight steel truss solution that could be removed easily after construction, once the wall was connected to and supported by the building,” says Bester. 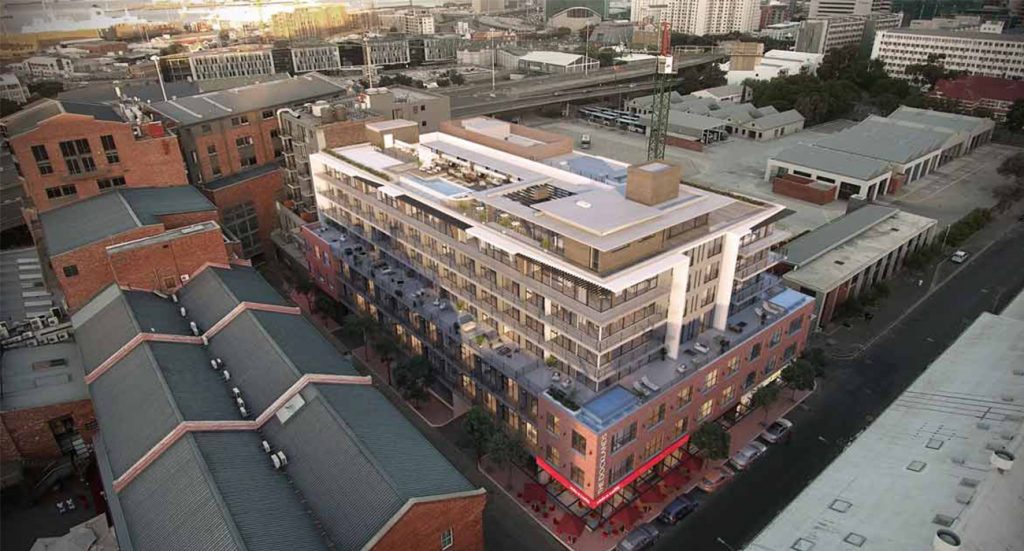 This sounds straightforward, but bear in mind that once the parking levels behind the wall had been built, the wall had to be tied into the concrete floors using movement-compensating connections to accommodate any differential movements between the heritage façade and the superstructure. The challenges did not end there. Building within the CBD is tricky enough due to the small plot sizes and need to maximise every square metre of the site for feasibility due to higher land costs. Furthermore, sites within the CBD are typically too small to comfortably accommodate parking garages, which have specific geometric requirements. “If you have tried to park in the Cape Town CBD, you would have seen that parking in most of the buildings is extremely tight. To enable proper parking circulation in 16 on Bree, we had to design a compressed lift-shaft core in the middle of the building,” says Bester.

The core is the spine of the building that gives it structural stability, especially one as high as 16 on Bree. The taller the building, the more critical the core, and also the larger it needs to be as a result. “There are ways and means of getting around having a larger core. We did not have the luxury of a large core as we needed space and circulation for parking.” The ingenious answer was to use outrigger walls to stiffen the core by connecting it to enlarged perimeter columns on the upper levels of the building. This resulted in a “push-pull” effect between the core and the enlarged columns, greatly enhancing the lever-arm of the force-resisting mechanism. Another complication was that the original apartment layout had a passage around the lift core that would have cut off the critical connection of the outrigger walls to the core, meaning it would not have worked as a solution. Here Zutari collaborated with the architect and service engineers to reconfigure the access walkway so that some apartments are directly entered off the lift lobby, thereby freeing up sellable area, as well as allowing uninterrupted connection between outriggers and lift shafts. This not only resolved the main problem, but also allowed the architect to use the enlarged perimeter columns as an aesthetic feature, which is clearly visible on the northern façade.

TAKE A LOOK INSIDE 16 ON BREE PRESENTED BY FWJK DEVELOPMENTS