First-time homebuyers: First-timers at the forefront 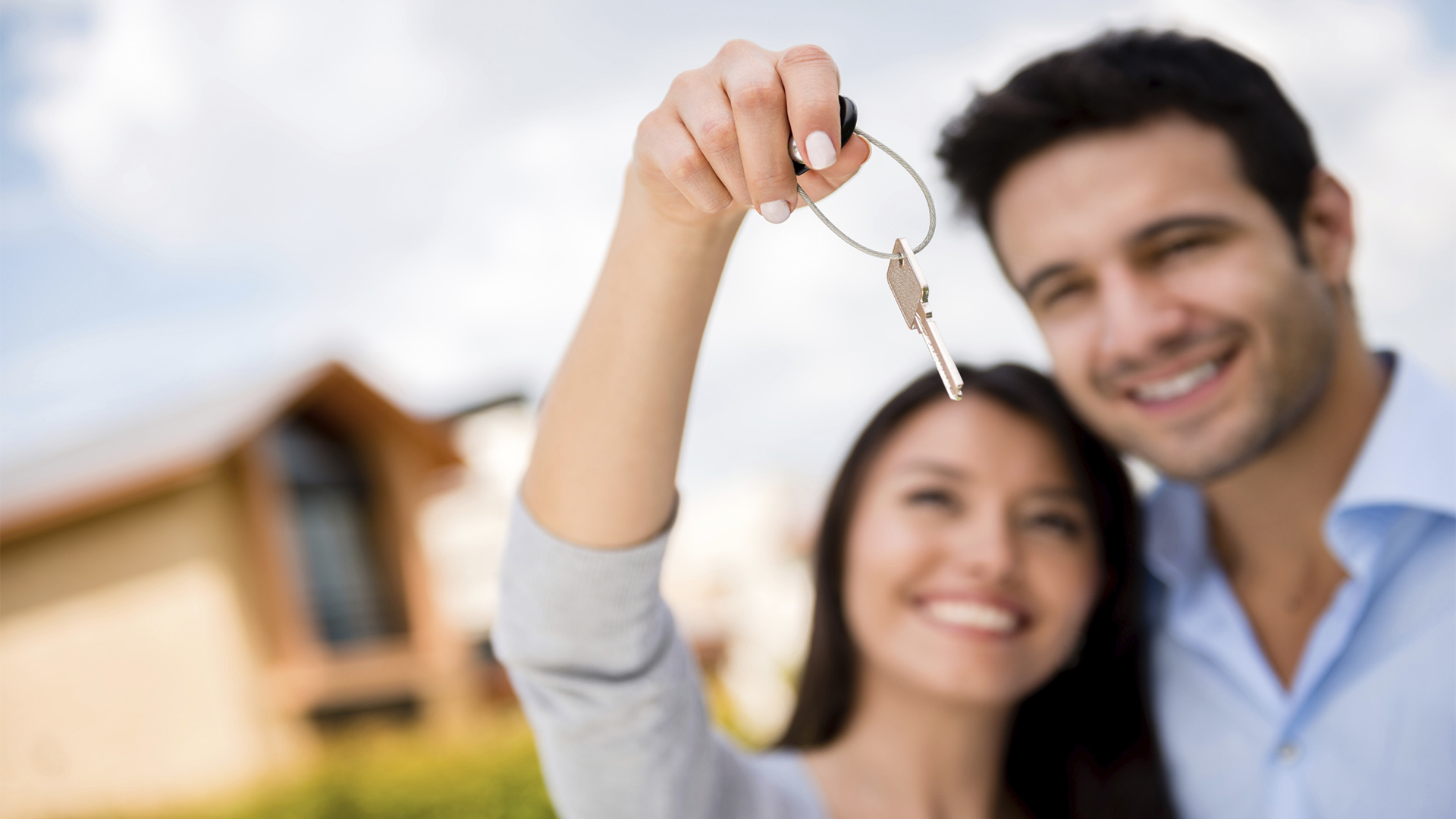 Low interest rates, improved lending opportunities and a myriad of purchasing choices, have created a favourable buying environment for first-time homebuyers to capitalise on

Low interest rates, improved lending opportunities and a myriad of purchasing choices, have created a favourable buying environment for first-time homebuyers to capitalise on

Taking advantage of all the positive factors encouraging people to become property owners, first-time buyers across the country are demonstrating confidence in the residential property market by acquiring their own homes. Many first-time buyers who were previously renting have grasped the opportunity to gain a foothold on the property ladder, having realised they can now afford such an investment in their future even at a lower monthly cost than their current rental payments, says Andrew Golding, chief executive, Pam Golding Property group.

What are they prepared to pay?

According to him, location and convenience probably top the priority list for many of today’s first-time homebuyers. While a modern home is first prize for those with the means to purchase it, young first-time buyers are often not averse to buying a more affordable property which needs some work, as long as the location and the price are right.

“With first-time buyers typically 34/35 years of age, but ranging mainly from their early 20s upwards, the average price of a home purchased by first-time buyers has been rising steadily, according to data collected by ooba,” he says.

Notably, in this market, the average price paid by first-time homeowners broke the R1m barrier for the first time on record in January 2020, then declined marginally, before surging in June 2020 as the hard lockdown regulations were eased. In January this year, the average price paid by a first-time homebuyer rose to a new record high of R1,138m before easing back to R1,12m in April.

Of further benefit to first-time buyers is that mortgage approval rates have been rising steadily from a mid-2016 cyclical low. Looking at the data from ooba, both overall and first-time approval rates peaked in February 2020 at 85.1% and 83.0% respectively, just prior to the initial lockdown. “Since then, approval rates for both first-time buyers and buyers overall have declined slightly, which may simply be attributable to a marked increase in the number of applications received rather than a deteriorating appetite for lending. “The fact is, approval rates remain elevated when compared to prior years, suggesting that the aggressive interest rate cuts in the first half of 2020 have ensured that more applicants are now eligible for a mortgage than was previously the case,” Golding says.

According to Sandra Gordon, senior research analyst, Pam Golding Properties, 100% bond applications have been rising steadily since early 2016 before reaching a peak in June 2020 – when pent-up demand was initially at its peak in the wake of the easing of lockdown regulations. “Such applications surged between May 2020 and August 2020 – peaking at 67.5% in June 2020, reflecting pent-up demand as buyers took advantage of the aggressive interest rate cuts, before applications began to ease, as the full economic impact of the lockdown began to emerge. Approval rates for 100% loan to value bonds for buyers in general and first-time buyers in particular have followed broadly similar trends,” she says. 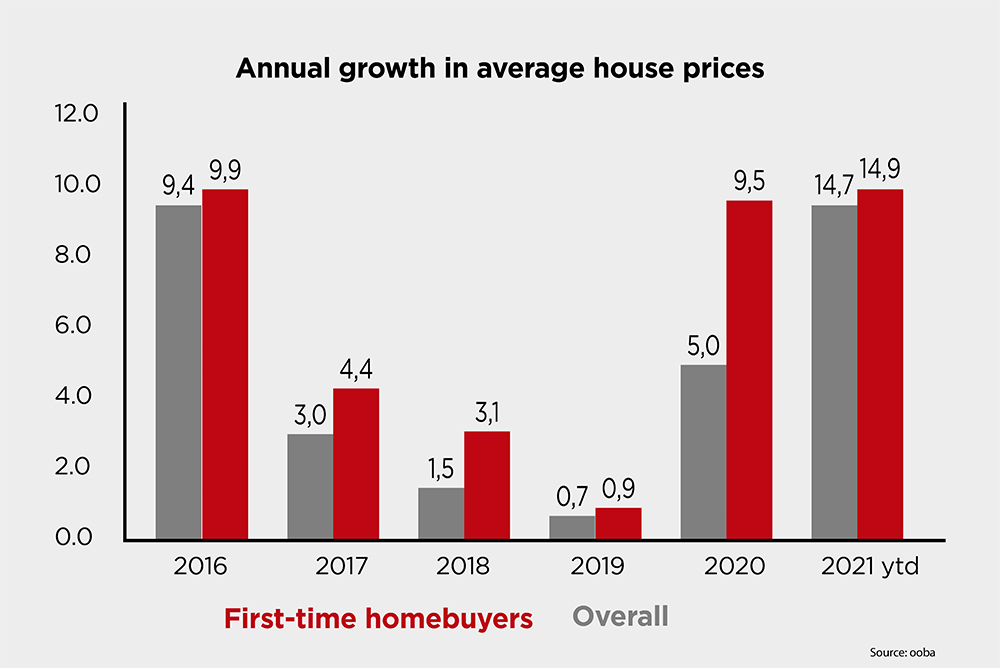 Commenting on the increase in the average house prices paid (both overall and for first-time buyers), Golding says there was a sharp acceleration in the growth in house prices, which for first-time buyers moved into double digit territory in September 2020, and for prices paid by all buyers in January 2021. Says Golding, “Double digit growth in house prices was last recorded briefly in 2010 and again in 2015/16. The current robust growth in average and first-time homebuyer prices is similar to the surge in prices in the wake of the global financial crisis and subsequent recession. However, a key difference is that, during the global financial crisis, house prices had actually been declining from year-earlier levels, prior to the 2009/2010 recovery.

“Given the weak state of the South African economy prior to the onset of Covid-19, the current strong growth in house prices across the board is undoubtedly attributable to the aggressive interest rate cuts last year and a strong appetite for mortgage extension by local financial institutions.” Adds Gordon, “Notably, the average price paid for a home by first-time homebuyers has grown at a faster pace than the increase in the overall average price paid since 2016, according to ooba. This trend has continued into 2021, with increases in house prices continuing to record double-digit growth rates.”(See above.)

First-time homebuyers get more than half

Encouragingly, the smoothed (six-month moving average) percentage of mortgages extended to first-time homebuyers by ooba has remained above the 50% mark since January 2020, although it has since declined from a peak of 53.9% in October 2020 to 50.5% in April 2021. In May 2020, just as the severe lockdown was easing and buyers were able to take advantage of the historically low interest rates for the first time, a total of 56.2% (not smoothed) of all mortgages extended were to first-time buyers – the highest percentage recorded by ooba (data collection began in October 2007).

“Realistically, however, the modest decline in the percentage of first-time buyers in the marketplace is likely to continue as the economic realities of Covid-19 and the impact of the lockdown take their toll on economic activity and mortgage lenders may perhaps become somewhat more cautious,” Gordon says. “In conjunction with this, deposits as a percentage of purchase price have been declining since 2017, reaching a lower turning point in May last year – 4.1% for first time homebuyers and 6.7% on average – before rebounding in subsequent months. This recovery in deposits as a percentage of the total (rising) purchase price hints at a tempering of risk appetite among financial institutions,” she concludes.